We Are a GRAMMY® Family

I Got All My Indies With Me

When last we left our sparkly shod heroine, she was limping out of The Soiree at the House of Blues after a flurry of GRAMMY® related fun the Friday prior to the broadcast.  It was an exciting introduction to how crazy things can get around awards season and how it really doesn’t seem to matter to most of the artists lucky enough to be a part of the festivities.  But how does one get to participate?  It’s not really about the flash we see on the telly Sunday night.

Tickets to the actual GRAMMY® Awards are pretty tough to come by.  Even if you can afford the $350+ per ticket, a lot of times there is a waiting list and you don’t know until almost the day of if you get in. Makes packing a bit difficult. Bring the dress? Bring the tux? Yes! Always bring the fancy!! Sorry, I digress…  The real action and networking takes place at something called the Pre-Telecast early Sunday afternoon.  This is the event that is held BEFORE (hence, Pre, duh!) the actual broadcast and all of those awards that we typically don’t hear about are handed out.  Most of the general public isn’t aware of these awards or thinks they are the ones “nobody cares about.”  Well, guess what? A LOT of people care about them!  This is where the indie artists that were so gracious to take me into their fold get recognized.  The Pre-Telecast is where the Best New Age Album is handed out. This is where the Best Comedy Album is awarded, Best Spoken Word, etc.  All of those GRAMMY® nominees that I had been casually rubbing shoulders with on Friday were up for their time to shine.  And shine they did!

One of the people I was lucky enough to meet on Friday was Grant Maloy Smith.  He’s a talented American Roots artist based in Rhode Island. He also seemed to know EVERYONE in the indie community that was at both parties on Friday.  He took time to say hello and commiserate, but he was also very quick to cheer and support his fellow musicians.  Grant and his wife host a famous brunch at the JW Marriott prior to the Pre-Telecast on Sunday morning.  I’d been hearing people all night talking about their schedules for Sunday including the party – and quite frankly, I was a little peeved that I hadn’t been invited to Grant’s brunch.  Well, after meeting Grant in the cramped back butler’s pantry walk through at the HOB, I finally got my coveted invite. It was Red Carpet GRAMMY® time, folks! 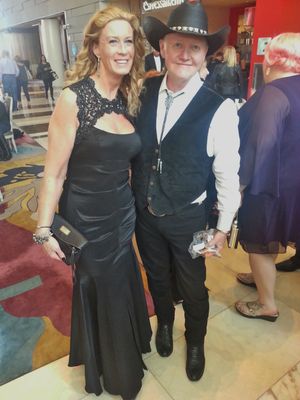 The Host with the most ... ponies. Grant Maloy Smith

Wait, the Red Carpet starts at 10am? Um, this kind of fancy does not happen quickly, and certainly not at the crack of dawn!  If I wanted my opportunity to meet even more movers and shakers, my ass was going to have to be out of bed, coffee’d up and in my SPANX by 9am.  Hair and makeup? Yep, that too. I could do it.  This was what the entire trip was all about – meeting people, making connections and getting the chance to walk an actual red carpet.  So up I got, did my hair, grabbed my gown and Uber-ed over to the hotel of an old colleague who was in town covering the GRAMMY’s for his radio station.  He happened to have his tuxedo (just in case – see, always bring the fancy!) and I decided to invite him for the chance to network.  I got changed really quickly and we proceeded to strut our 10a stuff right through the lobby, out to our car and off to Grant’s party we went! 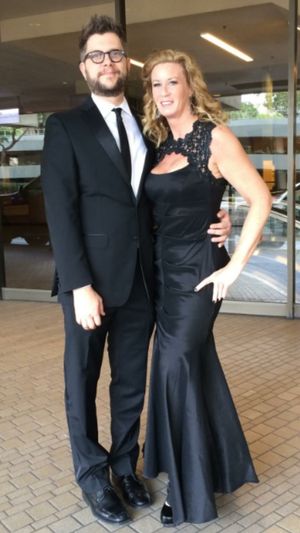 We arrived at the swanky JW Marriott LIVE and went right in. And by “went right in” I mean after I almost face planted getting out of the car. I told you, 5 inch heels and a floor length gown – not so much in the morning!  I managed to recover gracefully (pretending there was an offending crack in the driveway) and went in with my head held high and my feet already tingling. We were greeted by a throng of people milling about, chatting with each other and sharing in the excitement that was about to commence.  People I had only said hello to in passing on Friday were running up to me and hugging me; telling me how gorgeous I looked; how happy they were to finally meet me. Wait, what?  I’m not an artist.  I’m not some big shot music industry person – what can I do for you?  THEY DON’T CARE!

This amazing group of people is so supportive and genuinely caring that all they want is to make connections and share their joy with the people around them.  I stood back and watched as group after group of people ran onto the red carpet that Grant had set up and got their photos taken.  They were so full of happiness to be seeing their friends and peers.  It was a lot of “Hold on, where’s so and so? She HAS to be in this one!” and “Here, can you hold my purse? I need to get this!”  Strangers holding purses and grabbing cell phones to take photos.  People were piling into pictures, making faces and photo bombing like a bunch of teenagers.  Truly, the only way I can really describe it is as joyful glee.  I was introduced to a ton of people who all gave me cards and asked for mine.  Lots of artists and producers came up to me  and gave me CD’s.  As fun as it was, we all knew there was a purpose to this red carpet.  Meeting as many people as possible to help grow the indie music community.  You never know when someone will need help with something and you know “just the guy (or gal)” to get it done.  I’m a big fan of making things a win/win for everyone involved. 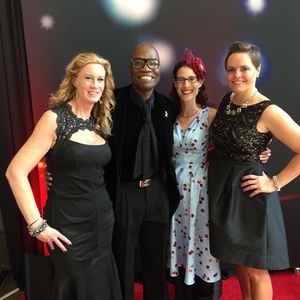 It was such a wonderful experience attending the brunch, and the mimosas made it a little easier to handle the early hour. I was so happy to finally put faces to some of the names I’d only seen on Twitter and other social media.  Kenya Autie, Stef Mariani and Lisa Sniderman are some of the lovely ladies that I was introduced to and they are even MORE lovely in real life! (Kenya and her husband Oscar own a studio in San Francisco and are a total riot!!)  If I hadn’t sucked it up and made the trip, I would’ve missed out on this incredible experience.  As much as I question whether or not I belong in this position, it was made very clear to me that I was right where I was supposed to be on that Sunday morning. 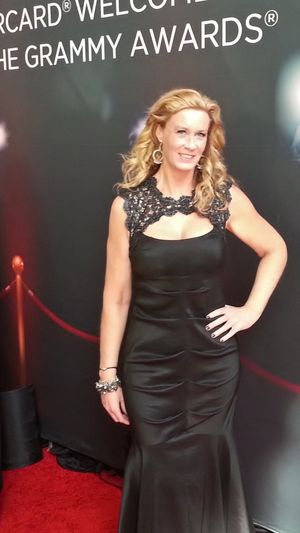 On the RED CARPET!!

The community of musicians that comes together is so supportive - it inspires me to continue working with them to help get their stories and music out there.  It really is a genuine sense of family and I could feel the love exuded by groups of people who were sometimes meeting in person for the first time.  There was a sense of camaraderie and “we’re all in this together” that pervaded the entire weekend.  The joy of being with other GRAMMY® nominated artists and the thrill of watching them win (Winds of Samsara – Best New Age Album!) was evident to me all weekend long. YOU might not have heard of Grant Maloy Smith, Jody Quine, Elizabeth Butler, Caesar Jazz Balladeer or Cecil Parker, but I guarantee you, they are a big deal in the music industry – the one you don’t see broadcast in Prime Time.  These are just a few of the folks who are in the trenches getting it done.  For the music.  Grant put it very succinctly, and I agree with him 100%.
"There are two Grammys ... unfortunately most people only get to see the one on TV, which is made for 12 year olds, felons and auto-tune specialists. But the PRE-telecast (which is streamed on the internet), is where 90% of the awards are given out. The show is OPEN SEATING -- there are no Kanyes in the front row. It's completely different, because it has hard working musicians in it who make music... because they love it. And it's where the depth and breadth of music are celebrated, from Jazz to New Age, World, Folk, Roots, and the rest. There aren't any temper tantrums or petulant tiffs. As a proud member of the Recording Academy, I wish that everyone could see THIS Grammy award show from a seat inside the Nokia Center. For my money, this is the REAL Grammys, because it represents what they should be about: musical excellence, humility, and graciousness." ~ Grant Maloy Smith

Some of the talented GRAMMY® Nominated Peeps at Brunch

Beau Derek and I never made it to the actual ceremony, but I don’t think we really missed it.  I was able to take off my fancy outfit and sky high shoes after brunch and went to the pool. We walked back later and wandered around the Staples Center and vicinity in relative peace and quiet. A lot of the people I had brunch with DID get to attend the GRAMMY® Awards and they were mostly relegated to the cheap seats, but still managed to make it into an experience of childlike wonder and fun.  To true music people, it’s not really about being in the front row or hundreds of screaming fans or seeing some over-produced and manufactured pop star.  Being at The GRAMMY’s means different things to different people – and you can make it into whatever you want it to be.  I strongly suggest going and being a part of the festivities if you can.  I made a bunch of new friends, some great business connections and got photographed on the red carpet. We even saw Richie Sambora & Orianthi while having dinner at Wolfgang Puck’s. That was my GRAMMY® win! 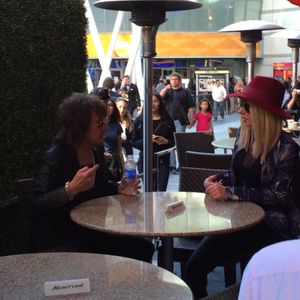 All work and no play makes for a hungry publicist!! Next up – some last minute touristy fun and all the food stops I could cram into my trip!  In-N-Out Burger here I come!!